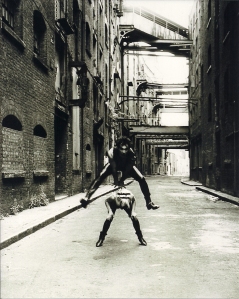 Another band made by Mark after Apres Sex was called Venus Electron.
I interviewed a bunch of singers who answered my ads in Melody Maker in the nearby Holiday Inn hotel. The idea was to give more respectability to the auditions. Some girls brought their mums!

When I started Soho Studios, I continued that duo, but I began working on a solo project entitled Ariel, as in the airy spirit, a sprite in Shakespeare’s Tempest

That character evolved into my commercially successful persona Charm. I liked this name firstly for obvious reasons! Secondly, it is one of a set of subatomic particles – which also includes the particle ‘strangeness’. That interest in physics has now led me into my current postgraduate research in astrophysics. Thirdly, as I explained to a good friend as to why I had the letters C.HARM emblazened on my trousers – See? Harm! Oh how we laughed